A Proposal for an Anthropology of Thought

We have all found ourselves involuntarily addressing inanimate objects as though they were human. For a fleeting instant, we act as though our cars and computers can hear us. In situations like ritual or play, objects acquire a range of human characteristics, such as perception, thought, action, or speech. Puppets, dolls, and ritual statuettes cease to be merely addressees and begin to address us—we see life in them.

How might we describe the kind of thought that gives life to the artifact, making it memorable as well as effective, in daily life, play, or ritual action? Following The Chimera Principle, in this collection of essays Carlo Severi explores the kind of shared imagination where inanimate artifacts, from non-Western masks and ritual statuettes to paintings and sculptures in our own tradition, can be perceived as living beings. This nuanced inquiry into the works of memory and shared imagination is a proposal for a new anthropology of thought. 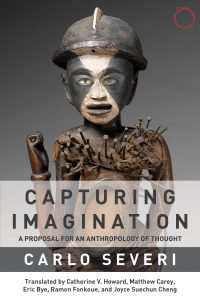 Carlo Severi’s new book is a masterpiece for its rare combination of erudition, attention to ethnographic detail, and its vast conceptual imagination. It is a unique book from a unique author who invites us to join him on a intellectual journey along a path, following the threads that guide us to new discoveries every step of the way. Using data from different parts of the world and different historical periods, Severi keeps the reader so enthralled that the title, Capturing Imagination, ends up sounding like an augur. Let yourself be captured.

—Carlos Fausto, author of Warfare and Shamanism in Amazonia

The relation between person and object is a topic that has been central to theory in anthropology and to the method of ethnography since its inception. With this excellent English translation of L’Objet-personne, Carlo Severi invites us to revisit the legacy of assumptions and resulting models that have influenced how we conduct ourselves around objects, how we approach them in research and analysis, and how we account for the difference they make to culture and society. A tour de force on the topic of person and object and its manifold offshoots, the book is a must-read for anyone acquainted with earlier classics and their unanswered questions, which are exposed and debated here in the most nuanced, sophisticated, and hugely accessible and readable manner. This book indeed is a joy to read and a gift for anyone interested in the fundamental paradox of being human.

Chapter One. On Living Objects and the Anthropology of Thought
Kūkai’s Vision

The Stakes of Formal Borrowings

Chapter Three. The Universe of the Arts of Memory

An Exercise in Methodology

Pictography and Memory: A Model

Kolossoi and Kouroi; or The Pragmatics of Images

The Image Through the Text: Identification, Hierarchy, and Prefiguration

Reflections on Funeral Rituals among the Wari’

Claude Lévi-Strauss and the Anthropology of Art

Principles of Analysis: An Example from Kandinsky

The Visible and Invisible in Works of Art

Perception and Projection in the Gaze

Wayana and Yekuana Iconography: Chimeras in the Amazon

Chapter Nine. The Semblance of Life: The Epistemology of Western Perspective

Poetry Without Words or Blind Painting?

New Meditations on a Hobby Horse

Perspective and the Anthropology of Images

From Presence to the Active Gaze

Severi delves into African, Amerindian, and European societies, moving from ancient Greece to the Renaissance to twentieth-century art. . . . In the cases he chooses, he questions the boundaries created by the notion of agency and the traps it hides as he seeks to explain the complexity of object-persons. . . . Postulating that images and objects have life means, in the social sciences, considering them as social agents. This paradigm of the object-person opens up new vistas: it requires going beyond the form and iconography of objects and situating them in their social space; it makes it possible to use the same analytical framework for objects originating from different cultures as well as those within the same culture but having different prestige, whether “fine art” or humbler images . . .

Interwoven in his analysis and discussion of particular cases, Severi makes his most remarkable breakthroughs. Many examples he chooses—mnemonique images, representations of relations, complex games of substitutions—demonstrate that what he calls the “visual salience” of an object is only one of the ways in which it is engaged in social life. . . . In the same spirit, the author demonstrates that the object never has a monolithic identity but instead crystallizes chains of actors and actions. . . .

The richness of the cases studied, the results presented, and the notions proposed will be useful to any observer who grapples with the images.