The Pitt-Rivers Omnibus brings together the definitive essays and lectures of the influential social anthropologist Julian A. Pitt-Rivers, a corpus of work that has, until now, remained scattered, untranslated, and unedited. Illuminating the themes and topics that he engaged throughout his life—including hospitality, grace, the symbolic economy of reciprocity, kinship, the paradoxes of friendship, ritual logics, the anthropology of dress, and more—this omnibus brings his reflections to new life.

Holding Pitt-Rivers’s diversity of subjects and ethnographic foci in the same gaze, this book reveals a theoretical unity that ran through his work and highlights his iconic wit and brilliance. Striking at the heart of anthropological theory, the pieces here explore the relationship between the mental and the material, between what is thought and what is done. Classic, definitive, and yet still extraordinarily relevant for contemporary anthropology, Pitt-Rivers’s lifetime contribution will provide a new generation of anthropologists with an invaluable resource for reflection on both ethnographic and theoretical issues. 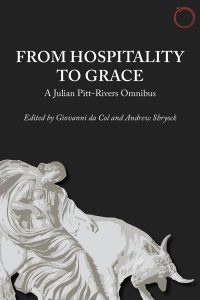 Pitt-Rivers’ writings have a supple and subtle quality of style and argument, the flow of a fine essay. He draws the reader, only seemingly easily for these papers are cleverly and tightly argued, into wide-ranging reflections on founding patterns and structures, codes, customs and practices that he suggests should frame our understanding of major topics and fields for inquiry such as kinship, hospitality, honour and sacrifice. He moves across ethnographic and historical domains, classical and biblical sources with remarkable scholarship and a capacity for creative speculation. Like Georg Simmel, he opens our minds to thought and to rethinking with grace and economy.

Despite his passion for promoting the anthropological study of the Mediterranean, [Pitt-Rivers’] stage was not the narrow one of “area studies” alone; he had much broader goals. The Zeitgeist of his era did not make it easy for a Europeanist to break into the Africanist-dominated world of British anthropological theory-making, even if that was the tradition in which he had been trained. But no man of honor (for it is clear that in much of his analysis he is musing on his own values and predilections) would have refused the challenge. . . . Far from being an antiquarian curiosity, as its period-specific style might initially suggest, his work is resonant with implications for the anthropology we practice today. . . . This collection is indeed an act of grace.

This omnibus collection of the writings of Julian Pitt-Rivers is not only welcome but also timely. An avid student of Mediterranean and European history, and an anthropologist often cited for his classical accounts of Spanish culture and authoritative writings on honor, Pitt-Rivers retained a deep interest in what makes communities, despite differences and conflicts, cohere and endure through time. His insights regarding intimate social relations, the role of ritual in public life, and the dynamics of making credible moral claims, seem to me invaluable to an understanding of “community,” today.

Acknowledgments
Introduction: A perfect host: Julian Pitt-Rivers and the anthropology of grace
by Andrew Shryock and Giovanni da Col
Part I: Moral frames: honor, mana, and grace
Chapter One: Honor and social status in Andalusia
Chapter Two: Mana
Chapter Three: The place of grace in anthropology
Chapter Four: The malady of honor
Part II: Uncertain relations: kin/friend, host/guest, male/female, and human/animal
Chapter Five: The kith and the kin
Chapter Six: Ritual kinship in the Mediterranean: Spain and the Balkans
Chapter Seven: The law of hospitality
Chapter Eight: Women and sanctuary in the Mediterranean
Chapter Nine: The paradox of friendship
Chapter Ten: Lending a hand: Neighborly cooperation in southwestern France
Chapter Eleven: Spiritual power in Central America: The naguals of Chiapas
Part III: Transformative rites: sacrifice, substitution, and the sacred
Chapter Twelve: The sacrifice of the bull
Chapter Thirteen: The role of pain in rites of passage
Chapter Fourteen: From the love of food to the love of God
Chapter Fifteen: Quand nos aînés n’y seront plus
Chapter Sixteen: The fate of Shechem or the politics of sex
Part IV: Analytics in place: concepts, theory, and method
Chapter Seventeen: Contextual analysis and the locus of the model
Chapter Eighteen: On the word “caste”
Chapter Nineteen: Race in Latin America: The concept of “raza”
Chapter Twenty: Reflections on fieldwork in Spain
Afterword: Grace and insight: The legacy of Julian Pitt-Rivers
by Michael Herzfeld
Reference List