by Clifford Geertz, edited and introduced by Lawrence Rosen

Originally published in 1979, Clifford Geertz’s essay on the Moroccan bazaar is a classic ethnographic account of the interplay of economic, social, and religious lives in the bustle of transaction. Drawing on years of fieldwork in the Middle Atlas town of Sefrou, Geertz explores how actors from diverse backgrounds assess the worth, and the meaning, of other people’s wares, words, and ways of doing business. He shows how the search for market information, so central to the theorisation of markets by economists, is here based on careful appraisals of social relations, embedded in understandings of the broader institutional environment of the market town and its hinterlands. With a richness of insights procured for generations of readers, Geertz’s essay on the sūq is a model of and for the craft of ethnographic theory. Long out of print, it is republished here in a stand-alone edition, edited and introduced by Lawrence Rosen. 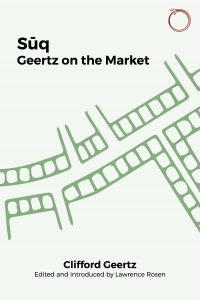 “At a time when there is a desperate need for better understandings of the Muslim world, this essay by Clifford Geertz, brilliantly introduced by his fieldwork partner and colleague Lawrence Rosen, once again illustrates the importance of cultural anthropology in providing insights into different peoples and places. This is anthropology at its best.”

“This remarkable book is a tribute to Geertz’s capacity to combine observation, interpretation, and comparison. It is a product of the first phase of his long career, when his main inspirations were from Max Weber and his colleagues at the Committee for the Study of New Nations at The University of Chicago. Geertz’s analysis of the bazaar remains unmatched in its attention to social detail and its cultural grasp of an economic form.“

— Arjun Appadurai, author of Banking on Words: The Failure of Language in the Age of Derivative Finance

“The brilliance of Sūq lies in its analysis of terms well-known in anthropology, but usually for their political valences (broker, clientelism, dependency); the way it shows their pertinence in the marketplace and demonstrates how exchange is so much more than a merely economic transaction. Geertz demonstrates how the bazaar is a cultural form, emblematic of society, an ‘analytic idea’ as much as an institution.“

— Deborah James, author of Money from Nothing: Indebtedness and Aspiration in South Africa

Clifford Geertz (1926-2006) was the Harold F. Linder Professor of Social Science at the Institute for Advanced Study in Princeton. One of the 20th century’s most notable anthropologists, he was the author of many books on the cultural study of economy and society.

Lawrence Rosen is the William Nelson Cromwell Emeritus Professor of Anthropology at Princeton University. He is the author of Law as Culture: An Invitation, among many other works of legal and political anthropology.