Selected, Annotated, and Translated by Jane I. Guyer

Scan down a list of essential works in any introduction to anthropology course and you are likely to see Marcel Mauss’ masterpiece, The Gift. With this new translation, Mauss’ classic essay is returned to its original context, published alongside the works that framed its first publication in the 1923–24 issue of L’Année Sociologique. With a critical foreword by Bill Maurer and a new introduction by translator Jane Guyer, this expanded edition is certain to become the standard English version of the essay—a gift that keeps on giving.

Included alongside the “Essay on the Gift” are Mauss’ memorial accounts of the work of Émile Durkheim and his colleagues who were lost during World War I, as well as his scholarly reviews of influential contemporaries such as Franz Boas, J. G. Frazer, Bronislaw Malinowski, and others. Read in the context of these additional pieces, the “Essay on the Gift” is revealed as a complementary whole, a gesture of both personal and political generosity: Mauss’ honor for his fallen colleagues; his aspiration for modern society’s recuperation of the gift as a mode of repair; and his own careful, yet critical, reading of his intellectual milieu. The result sets the scene for a whole new generation of readers to study this essay alongside pieces that exhibit the erudition, political commitment, and generous collegial exchange that first nourished the essay into life. 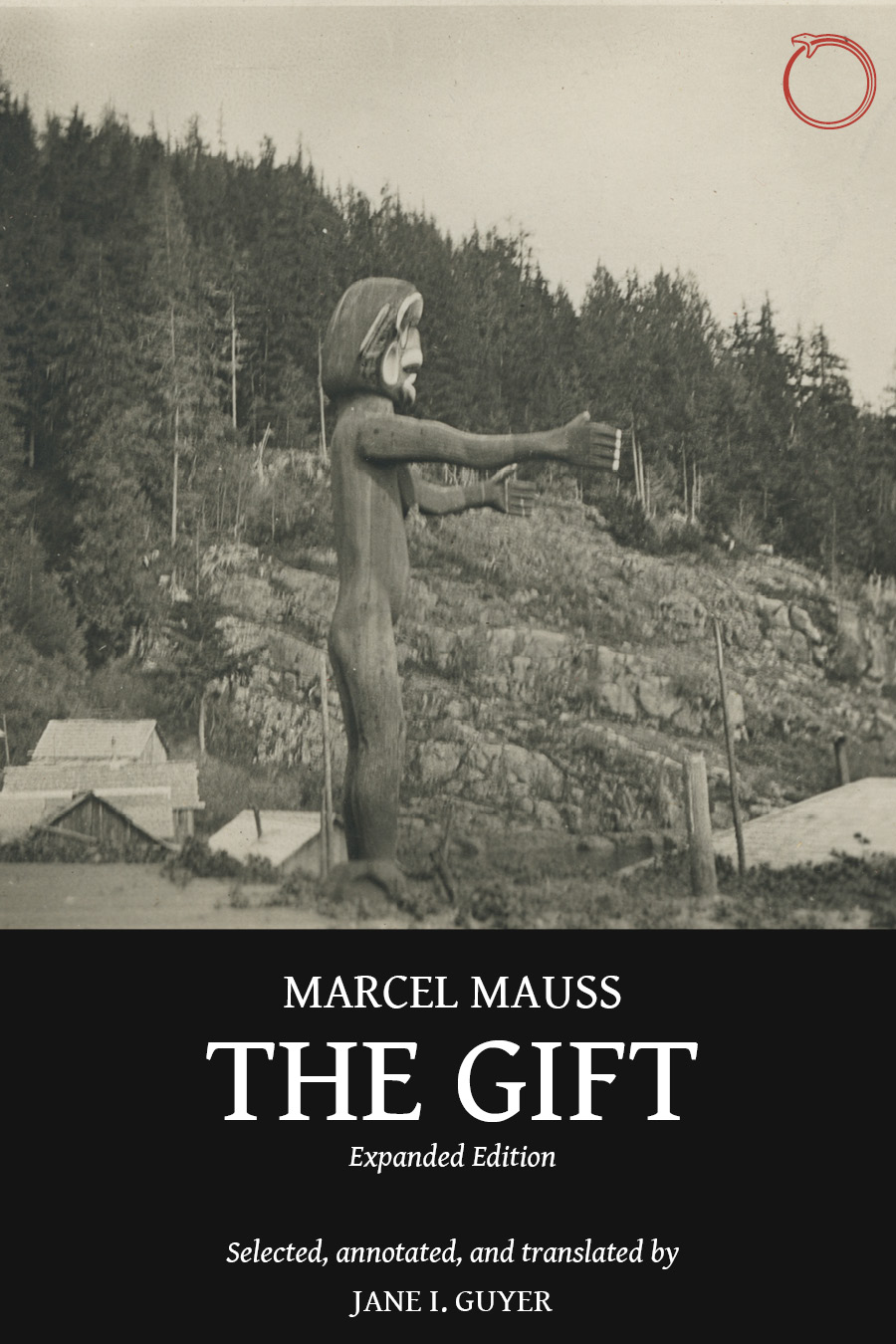 “The Gift is like a river that carries an immense mass of facts set in motion by Mauss’ vision. Guyer proves to be a skilled guide in navigating its perilous currents by giving us a nuanced translation that explores the text’s most secluded coves.”

— Maurice Godelier, author of The Enigma of the Gift

“Marcel Mauss wrote The Gift to refute the contrast between free gifts and self-interested markets. Yet, the opposition that he attacked—gift economy versus market economy—is often attributed to Mauss himself. Previous English translations were taken out of their historical context. Guyer has restored that context and has made the sociological argument more explicit. This long overdue publication will transform the essay’s reception, and stands to correct a text whose fame far surpasses most readers’ grasp of its meaning.”

— Keith Hart, author of The Memory Bank: Money in an Unequal World

“Not only is Guyer extremely attentive to the wealth of connotations stirred by every word, in every language; she is also attuned to understanding Mauss’ essay in the context in which it was written. This gives the reader the sense that Mauss is finally grasped fully—as an inexhaustible source of inspiration.”

— Alain Caillé, author of The World of the Gift (with Jacques Godbout) and editor of Revue du MAUSS

“The Gift is surely the most misunderstood work in the history of anthropology. Marcel Mauss is not entirely without blame for this. It is a work of notoriously scattershot brilliance; but, as a result, the essay has become a kind of screen for the projection of every sort of fantasy. Guyer’s excellent new edition will go a long way towards finally straightening matters out. There are endless riches here. But finally they are also in a form where we can see exactly what we’re being given.”

Marcel Mauss (1872–1950) was a French sociologist and founding figure in anthropology. His widely-cited and influential writings have inspired generations scholars across the disciplines.

Jane I. Guyer is the George Armstrong Kelly Professor Emerita in the Department of Anthropology at Johns Hopkins University.

Translator’s Introduction: The Gift that Keeps on Giving, by Jane I. Guyer

Part I: In Memoriam

In Memoriam: The Unpublished Work of Durkheim and His Collaborators

Part II: Essay on the Gift: The Form and Sense of Exchange in Archaic Societies

Introduction: Of the Gift, and in Particular of the Obligation to Return Presents

Chapter 1: The Gifts Exchanged and the Obligation to Return Them (Polynesia)

Chapter 2: The Extent of This System: Liberality, Honor, Money

Chapter 3: Survivals of These Principles in Ancient Law and Ancient Economies

A Selection of Reviews by Marcel Mauss

Excerpts from reviews of The Gift: Expanded Edition

“Among the most welcome features of this third English translation of Mauss’s classic is Jane Guyer’s decision to re-embed the Essai sur le don: forme et raison de l’échange dans les sociétés archaiques in its original setting in the journal L’Année Sociologique as published in 1925. Her translation and discussion of some of the original framing materials . . . demonstrate more effectively than the earlier English editions both the significance of the timing of this publication in the aftermath of the Great War and its centrality to the Durkheimian school. It was not possible to include all of the voluminous book reviews, and some of the excerpts are extremely brief, but, with the help of research assistants, Guyer has managed to track down the original English of most of Mauss’s quotations. Unlike previous translators, she contributes a substantial introduction, in which she elaborates on the difficulties of rendering Mauss’s text in English. . . .

“So, why are the works of Mauss and Durkheim, and this text in particular, still so important to the anthropological canon almost a century after they were written? Part of the explanation is surely that, in an age of ferocious specialization, we respect the old-fashioned polymath who can glide so easily from philology to legal history and, following numerous ethnographic detours, end up with profound social commentary on his contemporary world. The more important raison must be that, however different our moment in history, that commentary is still relevant. Mauss’s onslaught on the individualism of Anglo-Saxon liberalism offers a different view of human sociality, one that should be recovered today. Like Douglas, he is adamant that the gift economy has not disappeared in industrial society, though we may misrecognize its forms. It just needs to be reinvigorated. Although Mauss never employed the term ‘moral economy’, in contemporary jargon we might say that this is what he and the other Durkheimians were pursuing.”

“Guyer’s journey with The Gift began with a realization of the striking difference in size between the first English translation (Mauss, trans. Cunnison 1954) and the original publication in L’Année sociologique (Mauss 1925). What had been left out of the significantly thinner translation? The original, Guyer discovered, published to mark the relaunching of L’Année after the hiatus of World War I, started with a memorial to deceased colleagues and students (many of whom died in battle) and ended with an extensive review section (addressing the works of Malinowski, Radcliffe-Brown, and Boas, among others), much of it written by Mauss. Guyer’s decision to produce a new translation arose from a conviction that this contextualization—particularly the memorial and select reviews from Mauss—is critical for understanding The Gift itself.

“Mauss, Guyer argues, was writing out of an urgent need to find inspiration from other parts of the world, that Europeans might learn “to confront one another without massacring each other” (2016: 197). The new translation thus importantly changes the emphasis within the text. What was a round-the-world-ticket collection of notable instances of exchange—the accuracy and veracity of which have already been endlessly debated—emerges as a passionate political treatise written at a poignant moment in European history.”

“When is ethnographic theory? At a time at which so much of our theoretical development involves rethinking our disciplinary past, our answer might involve a kind of museum archaeology. Just as the archaeologist understands a museum object as the duration of an idea, so too anthropological knowledge can be conceived as a form of revisitation: a mediated, political and transformative return (Hicks 2016). In 1972, Marshall Sahlins wrote that Mauss’s Essay  ‘remains a source of an unending ponderation for the anthropologist du metier, compelled as if by the hau of the thing to come back to it again and again’ (Sahlins 1972: 149). Today, we might use Mauss’s account of archaism to reimagine residuality and reciprocity. Mauss and Guyer show us that the translator is always both donor and recipient. There is a force, just like the force in the gift, in anthropological knowledge. The return of ethnographic theory brings new obligations to our disciplinary past, through the fulfilment of which that past and our present become less stable than we might imagine.”