In this long-awaited sequel to The Invention of Culture, Roy Wagner tackles the logic and motives that underlie cultural invention. Could there be a single, logical factor that makes the invention of the distinction between self and other possible, much as specific human genes allow for language?

Wagner explores what he calls “the reciprocity of perspectives” through a journey between Euro-American bodies of knowledge and his in-depth knowledge of Melanesian modes of thought. This logic grounds variants of the subject/object transformation, as Wagner works through examples such as the figure-ground reversal in Gestalt psychology, Lacan’s theory of the mirror-stage formation of the Ego, and even the self-recursive structure of the aphorism and the joke. Juxtaposing Wittgenstein’s and Leibniz’s philosophy with Melanesian social logic, Wagner explores the cosmological dimensions of the ways in which different societies develop models of self and the subject/object distinction. The result is a philosophical tour de force by one of anthropology’s greatest mavericks. 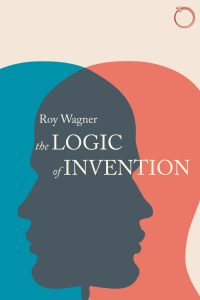 “A breath-taking journey into the energies of anthropological description and the description of anthropological energies. Wagner uncovers for us the logical infrastructures that hold the world open for us—in metaphor and the imagination, in ritual and the perception of time-space. The Logic of Invention is the book that brings the whole Wagnerian oeuvre to stand by itself, and from that position of liminality points, with unparalleled audacity and humour, to new horizons for our discipline.”

— Alberto Corsín Jiménez, author of An Anthropological Trompe L’Oeil for a Common World

Preface and abstract of the argument

A note from the editor

Chapter 1: The reciprocity of perspectives

Chapter 2: Facts picture us to themselves: Wittgenstein’s propositions

Chapter 4: The ontology of representation

Epilogue: Totality viewed in the imagination