Rethinking Magic and Kinship From the Trobriands

Bronislaw Malinowski’s path-breaking research in the Trobriand Islands shaped much of modern anthropology’s disciplinary paradigm. Yet many conundrums remain. For example, Malinowski asserted that baloma spirits of the dead were responsible for procreation but had limited influence on their living descendants in magic and other matters, claims largely unchallenged by subsequent field investigators, until now. Based on extended fieldwork at Omarakana village—home of the Tabalu “Paramount Chief”—Mark S. Mosko argues instead that these and virtually all contexts of indigenous sociality are conceived as sacrificial reciprocities between the mirror worlds that baloma and humans inhabit.

Informed by a synthesis of Strathern’s model of “dividual personhood” and Lévy-Bruhl’s theory of “participation,” Mosko upends a century of discussion and debate extending from Malinowski to anthropology’s other leading thinkers. His account of the intimate interdependencies of humans and spirits in the cosmic generation and coordination of “life” (momova) and “death” (kaliga) strikes at the nexus of anthropology’s received wisdom, and Ways of Baloma will inevitably lead practitioners and students to reflect anew on the discipline’s multifold theories of personhood, ritual agency, and sociality. 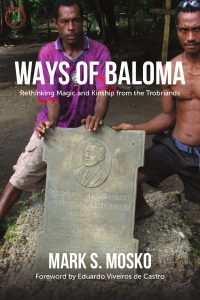 Would not the wizards of L’Année Sociologique be surprised to discover that all of their favorite conceptual glosses like sacrifice, prestation, ritual, and symbol could all be covered by Mosko’s single broad-scale analogy? Welcome to the twenty-first century, Bronislaw Malinowski.

— Roy Wagner, author of The invention of culture

This erudite and timely volume radically inverts much of the anthropological canon by offering a reinterpretation of Trobriand society that yields powerful new insights into kinship, magic, procreation, knowledge, representation and life itself. It is consequently an ethnography which has implications far beyond anthropology through its bold insistence that we acknowledge more fully the inextricability of any form of analytic category from the social context in which it is embedded.

— Sarah Franklin, editor of Marilyn Strathern’s Before and after gender

With Ways of baloma, Mark Mosko offers us a wide, deep and new view of the Trobriander’s ways of thinking, acting, and exchanging not only between human beings, but with their ancestral spirits, the baloma. Contrary to what Malinowski wrote about them, the baloma are involved every day in all the activities of the people. The baloma are the key to understanding what are life and death, kinship and magic, sacrifices, the body and the soul for the Trobrianders. The demonstration is superb.

— Maurice Godelier, author of The metamorphosis of kinship

This unique collaboration between an anthropologist and high-ranking intellectuals presents a radically revised understanding of Trobriand ethnography. Mosko returned to the Ground Zero of “ethnographic theory”—a term coined by Malinowski—to produce an analysis deliberately designed as a provocative and controversial intervention into contemporary debates on the nature of Melanesian personhood, and the neglected relation between magic and kinship.

Malinowski’s Trobriand ethnography is the most famous case study in social anthropology. Mosko has done long-term fieldwork in the islands and, on the centenary of Malinowski’s study, he has come up with a radical reinterpretation of key features of Trobriand life: magic, fatherhood, and the ancestors. Drawing on contemporary theoretical perspectives, Mosko has written the Trobriand ethnography for the twenty-first century.

Bronislaw Malinowski’s work on the Trobriand Islands of Melanesia is still respected, though not sacrosanct, a century after he conducted it. Succeeding anthropologists amplified or challenged his analyses and investigated areas he overlooked. Annette Wiener, for example, focused on the neglected topic of gender and Trobriand women in Women of Value, Men of Renown (1976). Mosko (emer., anthropology, Australian National Univ.) is the most recent Trobriand ethnographer, and the most comprehensive. He investigates the role of magic in the present, animated by Malinowski’s recognition that magic infused every area of Trobriand life. Nine chapters cover classic topics such as cosmology, mortuary ritual, reproduction, taboo, rank, kinship, marriage rules, and chiefly succession. Mosko generously acknowledges his Trobriand collaborators and the Trobriand work of other anthropologists. Most importantly, his research demonstrates the way that a century of anthropological theory and research, along with changing contexts and interpretive frameworks, have allowed new insights about Trobriand kinship, personhood, magico-religious beliefs, Christian conversion, and the relationship between humans and spirits. The author concludes that traditional beliefs and practices surrounding kinship and magic have remained material to Trobriand life through a century of colonial and postcolonial transformation. This important book is mandatory for all four-year and university research collections.

The Trobriand Islands in Papua New Guinea has been portrayed as a unique and sacred place in the genealogy of the discipline of anthropology, and especially that lineage which reveres Bronislaw Malinowski as one of its founding fathers. Mark Mosko’s recent book – Ways of Baloma insists on the centrality of baloma (ancestral spirits) as palpable, perduring presences in the lives of contemporary Trobriand Islanders. We might say that this book also animates the baloma, the ancestral spirit of Malinowski, not so much through rituals of reverence but through iconoclastic arguments which erode the empirical and theoretical foundations of Malinowski’s corpus and much of the voluminous anthropological literature on the Trobriands.

The Trobriand Islanders are one of the most thoroughly studied societies in the world. Is it possible, though, that after a century of fieldwork by some of anthropology’s most illustrious figures, including Annette Weiner and the master Bronislaw Malinowski himself, there is still much that has been misunderstood or overlooked? Mark Mosko makes a convincing case that some core aspects of Trobriand culture have eluded us and that comprehending those aspects solves major questions or mysteries in Trobriand ethnography.