John V. Murra’s Lewis Henry Morgan Lectures, originally given in 1969, are the only major study of the Andean “avenue towards civilization.” Collected and published for the first time here, they offer a powerful and insistent perspective on the Andean region as one of the few places in which a so-called “pristine civilization” developed. Murra sheds light not only on the way civilization was achieved here—which followed a fundamentally different process than that of Mesopotamia and Mesoamerica—he uses that study to shed new light on the general problems of achieving civilization in any world region.

Murra intermixes a study of Andean ecology with an exploration of the ideal of economic self-sufficiency, stressing two foundational socioeconomic forces: reciprocity and redistribution. He shows how both enabled Andean communities to realize direct control of a maximum number of vertically ordered ecological floors and the resources they offered. He famously called this arrangement a “vertical archipelago,” a revolutionary model that is still examined and debated almost fifty years after it was first presented in these lectures. Written in a crisp and elegant style and inspired by decades of ethnographic fieldwork, this set of lectures is nothing less than a lost classic, and it will be sure to inspire new generations of anthropologists and historians working in South America and beyond. 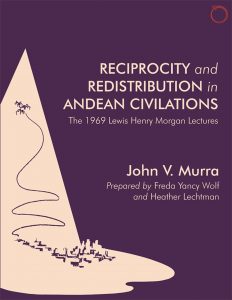 This book is a considerable achievement which presents, for the first time, the form of sovereignty that the Andean kingdoms exercised over the varied populations and resources distributed across the different ecological zones of the Andean mountain range. We also learn how the different states and empires built on and transformed traditional village and tribal forms of reciprocity and redistribution to extend their political and religious domination, as well as to extract labor and resources from their subject populations. John Murra hugely advances our understanding of pre-conquest Andean civilizations.

John V. Murra gave his 1969 Lewis Henry Morgan Lectures—not then fully written—at a moment when his “vertical archipelago” model of Andean polity was still hot on the anvil. Two of his students, Heather Lechtman and the late Freda Yancy Wolf, now bring this cardinal moment back to life through their meticulous annotated transcription of the original notes and recordings.

John Murra revolutionized our understanding of the Incas’ place among “pristine” States and modes of production: their ecological resourcefulness, “stretched” forms of reciprocity and redistribution, encouragement of local self-sufficiencies, political performativities, the management of power, etc. A superb speaker, his Morgan lectures come alive in Lechtman and Wolf’s scrupulous transcriptions of the tapes and drafts. In Perú, Murra had realized the connections between archaeology, documentary past, and ethnographic present. Here he frames his findings into a program, gripping listeners with his vision and commitment. An exhilarating experience of one of the most influential voices in Andean anthropology.